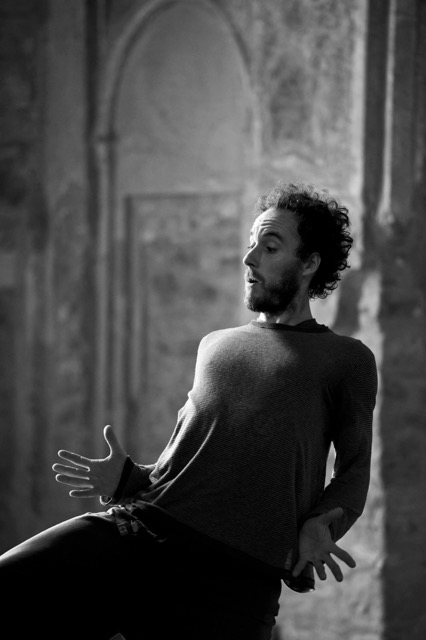 He studied Industrial Design at the University of Architecture of Genoa and then in 1999 at the modern dance theatre school in Amsterdam. As an actor he works for the children theatre “Teatro del Piccione” staging “BFG”, “Chisciotte” and “I eat the Moon” in Genoa, and for Lindsay Kemp in Rome. After meeting in Amsterdam Andre Gingras in 2000, he creates the dance solo “CYP17”, which was performed for 10 years in several venues throughout the world as, “The Venice Dance Biennale” and the “Sydney Opera House”, and “The Lindenmayer System”, The Hague/ Amsterdam. After joining Charleroi/Danses Plan-K/ Frederic Flamand, he performs with Angelique Wilkie in “Zeropoint”. Then in 2005, he takes part in UltimaVez/ Wim Vandekeybus participating and touring the creations of “Puur”, “Spiegel”, “Menske”, “Talk to the Demon” and the long movie “HereAfter”, Brussels. As playwright, he assists the choreographer/ director Elena Fokina with “Pristan” in Mexico, “Bielovodie” and “Between sky and earth” in Moscow. He performs for Klaus Jurgens in “Asa Nisi Masa” and in collaboration with Kenneth Flak, he creates “2Halves”, at The Hague/ CaDance Festival. In 2012 he starts collaborating with RootLessRoot/ Linda Kapetanea& Jozeph Frucek, for “Kireru”, “Europium” and “When the dogs assailed their masters”, Athens. In 2013 he premieres as actor in German Jauregui’s “Confession”, Zurich. In 2015 he participates in “Tornar”, a creation with and for children, by Seppe Bayens, Brussels. In 2017/18 “Puur” is restaged, performing and assisting Wim Vandekeybus for the Swedish Royal Ballet, Stockholm Opera. 2018 the “Last Meal Cafe’”, art expo curated by Tasya Krougovykh/ Pussy Riot- Moscow, Space W139 in Amsterdam.

He also teaches contemporary dance and theatre workshops internationally, as well creates his own production works.

He has been regularly teaching contemporary dance and theatre workshops for the CullbergBallet, the Swedish Royal Ballett and the DansCentrum in Stockholm, Norrdans in Sweden, forXie Xin Dance Company in Shanghai, for Ballet de Marseille/ Frederic Flamand, Dance Works Rotterdam/ Andre Gingras, regularly for the experimental dance school SEAD in Salzburg, in Amsterdam for the Theaterschool and the HJF, the TanzHaus in Zurich, for the Kalamata Dance Festival with Joseph Frucek& Linda Kapetanea/ Rootlessroot- Fighting Monkey and for International Workshops held worldwide.

When we begin tapping into the fundamental resources within each body, we start to re-discover our natural instinct in movement, movement which comes naturally, expressing a wide range of emotions and desires. Movement conceived as a necessity, as a theatrical act, rather than a form.

The class will focus mainly on the connection with one’s own body, with the understanding of its limits, in order to acknowledge how far one is willing or able to go. Awareness of the skeletal structure, its capability of mobility, its mechanics and directional awareness will help us to explore the space across the floor and through the air. Calmness always being the starting point. Learning to search for resting points during the use of force, power and strength. Reaching freedom when being locked. The natural state of expressions will allow us to find our own unique language, which will lead us towards movement material composed into phrases emphasising the full range of spatial possibilities coming from the floor to reaching the air above.

This particular work will help us to discover the many layers involved in partner-work situations like depending on another body, trusting it, controlling and caring for it, giving and receiving impulses, how to approach an outside body, dealing with weight and understanding the use of it, discharging it through the behavioural study of its own skeletal structure. Improvisational games will be the basic codes as well as games, which will allow us to discover how our centre behaves when charged or discharged with extra weight, keeping always an open mind towards one self and the rest of the group.

Theatrical games will lead us to discover the use of the voice as a natural element within our body, where the neutral state will be always the departing point, from where to evolve and to where, eventually, return, trying to understand its comfortability. Through improvisational methods, both movement and voice universes will be considered as a common ground to refer to, its rhythms, compositions, aesthetics, silences and stillnesses, remembering the instrument we make use of is always the same: the body. Rather then from a technical point of view, the voice will be stimulated to be used by discovering its own intentions, a series of exercises will be given to the participants under a playful form, where a unique universe will be discovered by entering in their own inner self, discovering the existence of the visible and invisible side, the connection between centre and voice, radiating and disappearing, allowing them to craft their own unique way of expressing whatever is laying inside each of them, without the need of judgement.

This contemporary theatre dance workshop is open to actors, dancers and circus people who are interested in movement and voice.